A look at hard water across the US 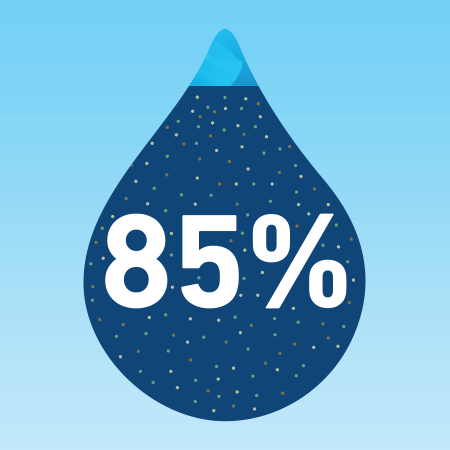 Only 15% of the United States has naturally occurring soft water. The remaining 85% of us get to fight the daily battles of hard water with spotty dishes, limescale buildup and appliance inefficiency.

Water out of a lake or river is called surface water and is relatively soft. The hardness factors in when water comes into contact with subterranean minerals. Limestone, which is rich in calcium and magnesium, is present across most of the country. As water passes through it, it picks up the hard water minerals along the way. The longer the water travels through these elements, the harder it becomes. This is why certain cities, counties and states can have varying degrees of water hardness.

U.S. water: The good, the bad and the ugly

People who live in the Pacific Northwest, parts of the Southeast, the Gulf States and New England can count themselves part of the lucky 15% living in soft water zones. They tend to see less than three grains per gallon of hardness minerals in their water, making it some of the softest water in the country.

Water from the Midwest all the way to the West coast comprises a majority of the 85% of hard water. In particular, the Midwest region is ranked as having some of the hardest water in the country. Ten grains per gallon (gpg) of hardness minerals in water is considered “very hard,” and many Midwestern households consistently average 16 gpg.

What does this mean for these homes? Embarrassing stains, spotty dishes, crusty faucets and showerheads, and limescale buildup in tubs and showers. Over time, they’ll also see an uptick in many household costs, ranging from regularly purchasing more soap to buying new appliances up to 50% sooner than expected.

With our country’s varied landscape, it’s no surprise that regions and cities throughout the U.S. vary in their hard water number. But these six metro areas are known for having some of the hardest water in the country:

Say goodbye to being part of the 85%

Just because you’re part of the 85% doesn’t mean you can’t create your own soft water. All you need is one simple appliance—a water softener—to fix the issue. A water softener will also save you money in the short and long term. For a quick look at how even the hardest water becomes soft, watch The Hows and Whys of Hard Water.

Take the next step:

You can find water softeners at: